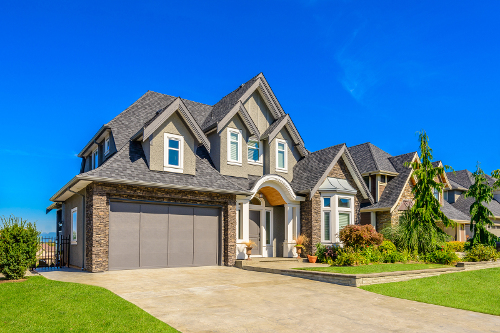 Moving to the suburbs can be a great opportunity for those who are interested in living near a city, yet don't have the desire to commit to living in the hustle and bustle that come with living directly inside city limits. While there can be many positives and negatives to living in any areas, there is a huge sweep of people who make the choice to live in the suburbs from all walks of life. People who have lived their whole lives in rural areas take the plunge to step out of their comfort zone and into the busier life that can be suburban living, while some who haven't ever lived outside of the concrete jungle decide to switch it up in favor of the living style that suburbs have to offer. Why are there so many who decide to transition? A few possible reasons are outlined below.

In the city, it's possible to find homes and apartments that are within walking distance of grocery stores, public transportation, and as many restaurants as can be imagined. Because of this, the cost of renting or owning in the city can be a bit pricey for a smaller square footage. The tradeoff, however, is that everything is closer and more readily accessible at all hours of the day and night. On the opposite end of the spectrum, it's common to find homes with property at a fraction of the cost in the city if the person looking to buy is looking in truly rural areas. Just like in the city, though, there are potential cons to owning a spacious property. In many situations, the homes are older and require renovation and more upkeep, plus the land takes more time to keep up and can be a lot of work. Plus, living in a small town can be a severe limit on the amount of retail and food options that are available and many places close between five and seven. Some restaurants are open until nine or ten, but the latter time can be quite the rarity in a rural town.

While the pros and cons of living in either the city or the country can be easily swayed in the favor of certain lifestyles, making a move to the suburbs is a nice middle ground- literally. Suburban areas what lie between the country life and the city life, and as such, often contain the best of both worlds. As compared to city life, the developments and neighborhoods in the suburbs are often much divided into larger properties, yet they are not quite as large as those found in rural areas. This means that it's possible to find a property with a yard, yet the land parcels are not typically acres deep. It's also typically more cost effective to build or buy a home here than it would be to buy in the city, plus the bonus of likely finding a home that is newer than a country cottage fixer-upper, though, if a fixer upper is the dream, suburbs often have a few available as well. Many people love to have a backyard for gardening, holding parties, outdoor entertainment such as volleyball or a fire pit, and numerous other reasons. While it's possible to find a home with a backyard in the city, it can be difficult and oodles more expensive. And, the costs of keeping up a backyard in the suburbs can be infinitely less expensive than keeping up with a larger property in the country.

Another draw for suburban living is the concept of living in neighborhoods. The city can be a place where there are so many people it can be daunting to meet even a few, and the country can be difficult to meet people due to the space distancing each home from another. Those who live in the suburbs have a chance to get to know their neighbors through community events and parties, or by simply going next door to borrow a cup of sugar. It is often less daunting to introduce oneself as there is more of a likelihood that one will see the same people day in and day out. Plus, living in a neighborhood is often less noisy than the constant hum of the city, yet has enough of a background noise that it combats the almost eerie quiet that can accompany country living. Often, subdivisions come with amenities such as a local pool, gym, and room for parties. There are folks who look out for one another- one of the perks of living near neighbors. Let's not forget that where there are neighborhoods, there are retail and grocery stores to accommodate the population. No need to worry about if the store will be open past seven, or if there will be a place that sells what you are looking for, as is the case in rural towns. Plus, the amount of people can drive the costs down as opposed to city life because the demand for goods is not as high as that found in the heart of the city.

Of course, there are always potential downsides no matter the area. It can be more expensive to furnish a home in the suburbs as opposed to the city, due to more space to put furniture and knick knacks. Likewise, there may be landscaping costs that wouldn't apply to living in an apartment in the city. If employment is found in the city, and the home is outside of the city, the extra savings from living outside of the city housing market may be overshadowed by the time and money it can take to commute to work. Plus, there is less of a nightlife, so living in the suburbs may seem dull to those who love to adventure down the streets of the big city. Contrariwise, suburban living is not as spacious as living in the country. Sometimes small town charm is easier to handle than the social aspects of keeping up with the Joneses. Also, anyone who wants to have land to ranch or farm is likely going to have a harder time in the suburbs due to the slight constriction of space.

Where a person decides to live has many components, and as such, can be a difficult decision to make. Luckily, there is middle ground that can be easily found in the suburbs. Take a look and what is out there may be surprising. Who knows? Maybe a move to suburbia is in your future!