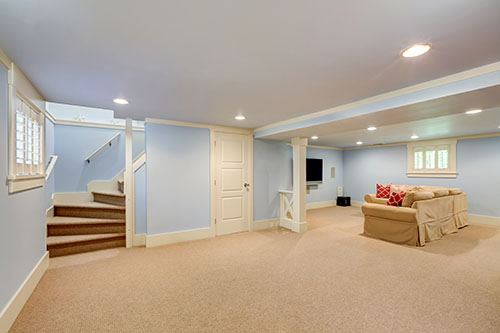 Once a home is built, it may become difficult to add more square footage. This was even more the case prior to current building practices and the invention of various technologies and machines. One place people felt would add some extra storage room and be able to keep foods cool was the space under the house. Sometimes known as a root cellar, basements and the idea of basements has been around for a very long time. Today, the original utility of the basement has been has been expanded to include everything from entertainment to rental living quarters.

Older homes may have basements that are considered unfinished. This floor would often be the place where electrical boxes are found, shelves for storing food and tools would be located, and air conditioning units would rest here. Newer homes may have basements that are likewise considered unfinished, but they have the bare bones for building up the space into a recreational room, living quarters, or any other purpose imaginable- even a bowling alley. Basements have evolved in so many ways and have become a welcomed addition to a home for more reasons than one.

Homeowners with basements may find that the space is large enough to house another tenant or several tenants. For people with a mortgage payment due monthly, the utilization of the basement as a place to rent out can mean having help to pay off the home. It's not a bad way to live, provided the downstairs tenants are responsible and respectful. Another way to use a basement is to turn it into an office suite. Work-from-home jobs can get a bit hairy when there is a requirement for a separate space or office away from the general living space. Being in a basement can offer a small amount of noise protection as it is farther away from outside sounds. It can be a great place for a small business such as a barber shop or a chiropractic office. Before signing off on an office remodel, however, check local laws and make sure that the law allows for a business to be run from home and obtain the proper permits in order to keep out of legal trouble.

There are some places that won't allow basements to be built. If owning a home with a basement is a priority, it is a good idea to look into local laws and water tables so that there is no disappointment upon buying a property that is not zoned for a basement. One reason that is common in places that don't allow such spaces is that there is an issue with how high the water table sits. Because basements are underground, there may be a higher likelihood of leaks and floods. Those who live in areas affected by natural disasters such as tornadoes and earthquakes, living in a home with a basement may be a safer solution than owning a place built solely above ground. Basements provide safer shelter as they are protected from the elements and often are built with sturdier products like cement as opposed to wood. They aren't the end all be all in the form of protection from such storms, but they can provide a bit of shelter in a worst case scenario, similar to an underground bunker or bomb shelter.

In areas such as homes built on hills, there are some pretty cool options available for homeowners. It's possible to build a walkout basement which can let in more light while still being cooler than the rest of the home. Preparing the property for a walkout may mean paying more money for construction. Leveling the ground prior to building a walkout is very important as settling under a foundation can be a tricky thing to fix later on.

Homes with little in the way of square footage can be doubled by the addition of a basement. Most people think of building out and adding on above ground in the form of an extra room where the porch used to be and other similar solutions, but if the home is in a good location for a basement, it may be easier to add a few rooms onto the underneath-side of the home. It can be a great place for bedrooms as they stay cool in the summertime and can be heated up by space heaters, wall heaters, wood stoves, and more in the winter. It can also be a great way to create an art studio or game room that can be enjoyed by many.

Basements are not all sunshine and roses. They can be places prone to flooding, pests, and mold. To properly build a basement, there are measures that must be taken to seal the walls and prevent such problems as water leaks. Most basements don't have much in the way of lighting. Windows are often small and open to window wells. In homes with partially submerged basements, windows may be able to let in more light, but that's not always the case. Spending a lot of time in a darker space can affect mood. If this is the case, it may be well worth investing in a sun lamp or two to help with brightening the room.

There are many pros and cons to consider when looking to purchase a home. Some decisions may be harder than others, but when it comes to owning a basement, it is definitely a matter of personal preference. They are not for everyone, and that is alright. Those who are longing for that cool space to turn into their own haven will find that basements are versatile and fun, even if they are a bit of work to keep up.